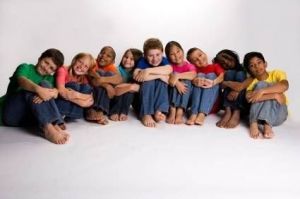 I never really spent time around young children growing up.  I was never a babysitter.  As I became older, my friends often speculated lightheartedly that I would never survive as a mother, since when kids were around I was either like a deer in headlights or was a bit disdainful with the mess, noise, and general chaos.  Even when my own child was born, I had never changed a diaper.  So when Jesus says, “Whoever does not receive the kingdom of God as a little child will never enter it,” I have often worried how serious he really was about that.

But this Christmas and Epiphany, I slowly began to see the wisdom in Jesus words.  My own daughter really opened up the incarnation for me this year in a fresh way.  Over the holidays, we made our way to St. Mary the Virgin Episcopal Church in Times Square.  After Eucharist, while looking at the many side altars, my daughter found a crèche.  She immediately ran up to the small crèche, and knelt on her knees to look at the figures.  I was shocked at the peaceful calm that came over her as she knelt at Jesus’ manger, and was immediately reminded of the way the magi too were brought to their knees in the presence of Jesus.  Her small body kneeling at the feet of Jesus gave me a small window into Jesus’ words about how children guide us into the kingdom.

But my daughter was not the only child who opened up the incarnation for me this year.  Our confirmation class of six teens got word from a parishioner of families in a local hospital who would not be able to afford Christmas gifts this year.  So, the class agreed to take up their December class time (adding in another class sometime this spring as a make-up) to go together and shop for gifts, using their own money.  The pile of gifts the next day blew me away.  Without even thinking, our confirmands demonstrated Christ’s love incarnate in a season that can typically be very self-centered.

Finally, this past Sunday, our young people offered an Epiphany Pageant in the context of worship.  Because they were helping lead worship that day, I asked the children and youth to pray with me the same prayer that I pray with our choir and acolytes before we lead worship.  And although we had the typical smiles and photo ops, the children seemed to really get it – they were leading worship.  And as the pageant closed, with all the kings, shepherds, angels, Mary and Joseph kneeling at the feet of the Christ Child, the incarnation came alive once again.  I could feel the reverence of our children, and they drew me out of my smiles about their “cuteness” and reminded me of my own need for a posture of reverence at our Lord’s feet.

So today I am grateful for the tremendous life and witness of our children.  They are teaching me everyday new and deeply meaningful ways to enter the kingdom of God.  Thank you for your witness to me and to the people of faith.