Today I drove by a pharmacy whose property is regularly peppered with “day laborers.”  I have yet to see someone actually out hiring people, but I imagine it must happen since every time I pass by, there are always 5 – 20 men standing around waiting.  Of course there are more men in the mornings and less in the afternoons.  But I consistently see men there, even in the late afternoons.  I have often wondered whether these men actually get hired at such a late hour, but their presence there leads me to believe that they must some days.

As I drove by the men gathered today, I was reminded of Jesus’ parable of the laborers in the vineyard (Matthew 20.1-16).  The landowner goes out at nine, noon, three, and five, each time hiring men from the marketplace.  At the end of the day, the landowner gives a full day’s wages to all the men, regardless of how long each person worked.  The ones who work the longest grumble at how unfair the landowner’s actions seem, but the landowner scolds them for their disdain for landowner’s generosity. 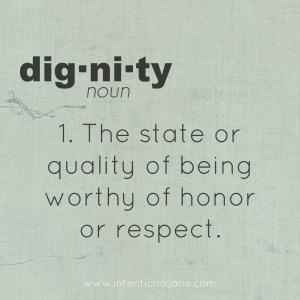 What I have always liked about the parable is the way that the landowner sees the humanity in people – recognizes that even though someone did not get the opportunity to work, they may have wanted the dignity that work provides and the security that income can create.  I think we often forget the ways that our society strips people of dignity – either by creating barriers to earning a livable wage, by creating systems meant to help individuals without realizing how hard receiving help can be, or by simply reducing people into issues – “immigrants,” “refuges,” or the “homeless,” as opposed to persons known by name.  One of my new favorite blogs/Facebook pages is called “Humans of New York.”  A photographer collects photos of assorted people from New York and usually includes a quote or a short story about them.  I just love the glimpses into people’s lives – people you might never give a thought or glance to, but who have a story.

We promise in our baptismal covenant to “respect the dignity of every human being.”  I wonder what that looks like in your life.  Just this morning I ran across a video of a man who approaches a homeless man on the street – a person who is virtually ignored by every other person passing by.  The man asks if he can borrow the homeless man’s bucket, and at first the homeless man seems wary and concerned.  But to his surprise, the man uses the bucket and a couple of friends to create an impromptu moment of music, which leads to some extra cash that the man then gives to the homeless man.  Something about the video give me a glimpse into what we mean when we talk about dignity – all three “helpers” sit with the man, they make him a part of something beautiful, and then they let him live in peace.  But especially they seem to be saying, “I see you.  You are not alone.  You are a person and I honor your dignity.”  How might you respect the dignity of every human being today?