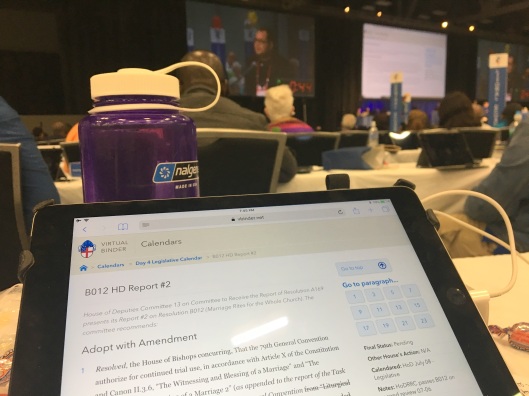 As an alternate to General Convention, I stood ready to fill in when deputies needed a break from the floor.  On the two sessions where I was able to serve as a Deputy, I was able to participate in the debate, revision, and voting on B012, entitled Marriage Rites for the Whole Church.  This resolution came to be because although we authorized marriage rites for same sex couples at the 78th General Convention, there was a provision that allowed bishops who hold a theological position that does not embrace marriage for same-sex couples to forbid his or her priests from conducting such rites.  This left the LGBTQ community in those dioceses unable to be married in their home parishes by their home priests, despite a change in the legal ability to do so.  This was deemed a compromise that could keep everyone at the table despite our theological differences.

However, given the protests of the LGBTQ community and their supporters, B012 proposed an option for priests and their parishes who wanted to conduct marriages for all despite their bishop’s protest to seek the oversight of another bishop in the Episcopal Church.  The resolution allowed for bishops and protesting churches and clergy to hold their ground, while also allowing dissenting clergy and parishes to minister to their community fully.  I talked about the testimonies and debate about this issue earlier.  The resolution was heavily edited as a result of that that testimony, and what came before the House of Deputies seemed like a well-crafted compromise.  But the debate on the floor indicated something quite different.  Our more traditional brothers and sisters felt their theology was being compromised, and many diocese in Province IX, including churches in foreign countries where same-sex marriage is still illegal, were threatening to break from the church.  It was a heart-wrenching debate, and our own deputation was even divided on what to do.

When the vote finally came, we voted by orders – so that the entire house could see how the lay and ordained voted.  As the minutes ticked by, my stomach turned.  I honestly did not know what would be the best outcome, and I feared for our path forward.  When the votes came in, they were overwhelmingly in favor of B012.  I am not sure what changed people’s minds, and I am not sure how people came to see that this was a good compromise.  My only reflection was that everyone was a bit unhappy, not fully getting what they wanted – which is the definition of a good compromise, if you ask me.

I do not know if the passage of B012 will have any negative impact in the future.  What I do know is that the process seemed to model something we have a hard time doing in the United States – compromise.  I have always said that if the Episcopal Church cannot model compromise, respect, and dignity, we cannot expect the world outside to do so.  The passage of B012 in both Houses made me feel like there might be hope for all of us to witness compassionate compromise through Christ to others.